Deborah is a 75-year-old woman who lives by herself in a rural BC community. At her last doctor’s appointment in town, her doctor told her she may be at risk for a fall and prescribed her the Plantiga system so he could monitor her health remotely. At baseline, she is ambulating without a gait aid, but over time there is a steady decline in gait parameters. As the fear of falling sets in, Deborah begins to avoid exercise and unnecessary activities, leading to a further decrease in strength and balance ability. Her doctor notices this decline and prescribes Deborah a gait aid and a falls prevention exercise regime, with the goal of improving aerobic capacity, balance, and gait patterns. After 6 months of the program, Deborah’s walking speed, stride length, and balance ability have increased and leveled off just below her baseline. Plantiga allowed her doctor to monitor her risk of falling without Deborah having to make the long commute into town. It also helped to give her confidence in herself as she could objectively see her improvement from the fall prevention program.

Deborah performs a two-minute walk test once a week at a self-selected pace, along the same walking path. Her doctor looks specifically at the following three metrics.

decline and as the fear of falling begins to set in, her gait slows even more and her overall activity level drops. Over the next two months, her gait speed drops to 0.8 m/s. The introduction of the gait aid helped to slow Deborah’s decline, but her fear of falling means she is hesitant to test her limits. However, as she gets stronger and more confident with the falls prevention program, she is able to increase her walking speed to 0.96 m/s, just below her baseline. 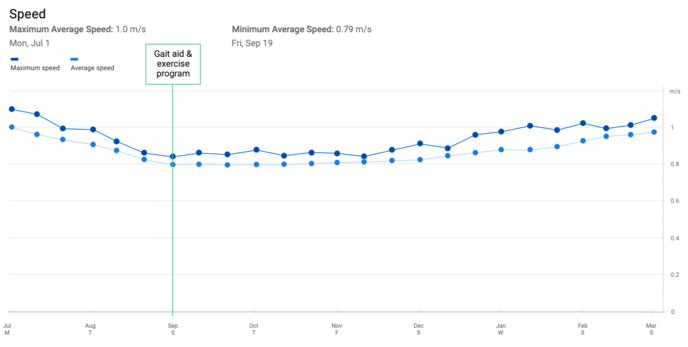 ‣ Balance Ability - Balance ability is reflected by the percentage of the stride spent on both feet, as a lack of confidence or stability would cause someone to adjust their gait pattern so that more time is spent on a wider base of support. Deborah begins with 25% % double support, which increases to 30% until she is prescribed a gait aid. With the aid, she is able to balance better and with the exercise program, she returns almost to her baseline values, settling around 27%.

‣ Gait Parameters - The decline in Deborah’s stride length is another flag for her doctor that she is at higher risk for a fall. This metric reflects both her fear of falling and her physical weakness as she is unable to support herself with longer strides. Deborah begins with an average stride length of 1.26 m, but it decreases 1.20 m. The prescription of the gait aid and the exercise program help to slow the shortening of stride length and even improve it to 1.23 m as she builds confidence, endurance, and strength.

Deborah’s progression over 9 months is monitored by her doctor remotely and through their video follow-up appointments, Deborah is able to intuitively understand her deterioration and subsequent improvement, giving her confidence in both her doctor and herself.

Did this answer your question?