Jenny is a 40-year-old woman with relapsing remitting multiple sclerosis (MS), who recently experienced an MS flare. At baseline, she was ambulating without a gait aid. Upon diagnosing her flare, it was noted that she had new lesions in her right cerebral hemisphere. Symptoms of her relapse have manifested in slowed gait, increased tone in her left lower limb, and reduced functional capacity. After treatment with IV corticosteroids for 5 days, Jenny was prescribed gait retraining (with and without an ankle-foot orthosis) with physiotherapy twice a week as her symptoms improved. Jenny already has baseline values for walking speed, limb asymmetry, and cumulative load. Plantiga assisted in measuring the therapeutic response to medical treatment, monitoring workload per therapy session, and assisted in clinical decision making regarding the need for a gait aid. Shown is 6 weeks worth of data: the 1st week represents her baseline gait characteristics, and the last 5 weeks represent her relapse along with treatment. 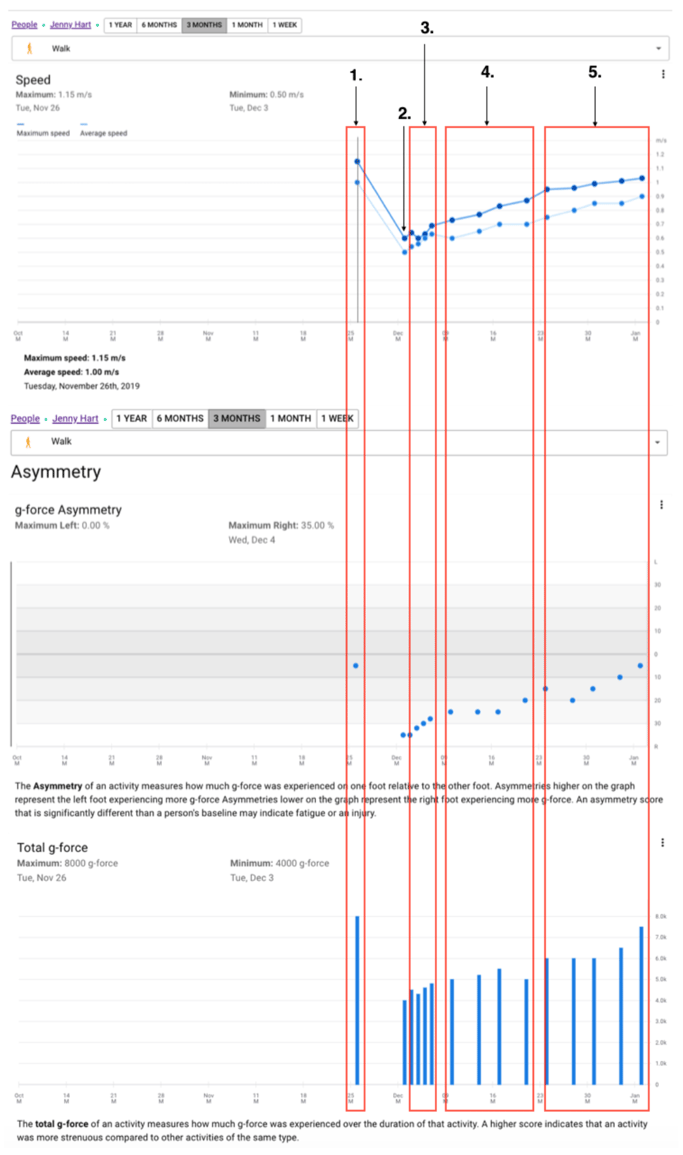 2. 1st appointment - (Relapse of Symptoms) - After noticing increasing spasticity on her right side, Jenny schedules a check-up.

3. 1-1.5 weeks - (Diagnosis of Condition + Outpatient Treatment (IV Corticosteroids + Physiotherapy)) - Since Jenny was diagnosed with an MS flare in the right cerebral hemisphere, her baseline hemiplegic gait pattern has worsened. She is prescribed IV corticosteroids and referred to outpatient physiotherapy for gait retraining and consideration for an ankle foot orthosis or gait aid.

After 5 weeks of out-patient physiotherapy, the symptoms of Jenny’s relapse have subsided and she is ambulating near her pre-relapse values. Note that Jenny’s baseline speed is below average for her demographic, and more importantly, her discharge gait speed of 0.9 m/s is a risk factor for falls. Jenny is thus fitted with a gait aid for use on uneven outdoor surfaces. As it is common for patients with relapsing-remitting multiple sclerosis to experience additional relapses, Jenny is recommended to return semi-regularly for assessment as her condition progresses.